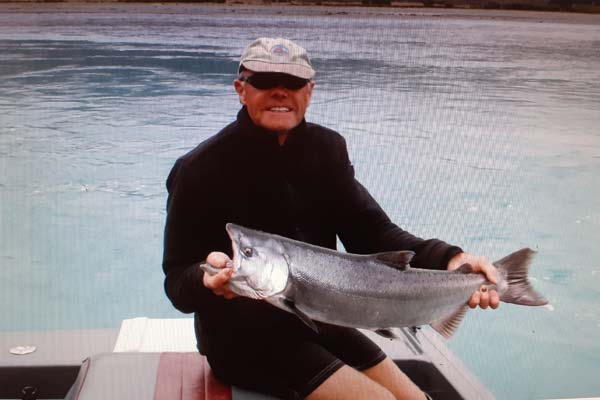 Gary with the ultimate prize - A Rangitata Salmon

As my parents had a Station up the Rangitata Gorge, I was born and bred up there and have been fishing the river for app. 55 years.
Ever since I was a child I loved the outdoors and with the river at our back door, fishing became a natural hobby for me.
I remember back in the 1960's when salmon were plentiful and it wasn't hard hard to go out and catch one for the table.
My Mother used to bottle salmon until my Father purchased a canning machine. He had a “secrete” recipe that had a tomato sauce in it amongst other ingredients, It was delicious!

I remember the day my Father was asked to take some American tourists out for a bit of a fish. They fished this hole and caught nothing. Two fishermen walked down to us from upstream and dug two salmon out of the sand right beside us. I couldn't believe it as the tourists all took turns getting their photos taken holding the fish and rods, pretending they had caught them!

I can remember distinctly my very first salmon. I had my friend from high school up staying for the weekend. My Father and elder Brother had gone out the night before and caught a couple. The next morning Dad took my friend and I to the next hole upstream. I hooked my first salmon here (on trout gear). Dad made me play it very carefully but I must have been too hard on it as I lost it. I was absolutely gutted! We fished a while longer without success so we went back down to where my Father was fishing the previous night. Straight away we had success with both my friend and I hooking up together. Dad made us play our fish for App 45 mins and we both landed them. We were so thrilled!

One morning I was fishing on my own and hooked a salmon. I played it for a long time and had the fish in at the bank sucking air for quite a while. I thought the fish was ready to collect (no net or gaff) so did a very silly thing. I put my rod down and slid my hands down the line keeping pressure on the fish. It gave one last flip and broke off at my Z spinner. I remember balling my eyes out  as I was so close to landing it. When I calmed down I noticed the fish was still there, about a meter out and a meter down. It was obviously trying to recover. I very quickly tied another Z spinner on my line and carefully dropped it down to the fish. I finally managed to hook the new Zeddy into the ring of the one still in its mouth and slowly put the pressure back on again. The salmon gave a bit of resistance but was still weak and I was able to get it in again. This time I held onto my rod and was able to land it. A lesson very well learnt!!

Another day I will always remember was in the early 70’s when my Father and I had a “Father Son” bonding day. He had not long purchased a brand new Morris 1800 Mk ll front wheel drive. He loved this car and thought it could go anywhere.  He drove it all the way down Forest creek and right over to the Ben McLeod bluffs. We had the car right at the waters edge. You could have cast out sitting on the seats! We had a very successful day there with both catching three salmon each and losing another couple each. We obviously had struck a run and I remember celebrating our success with a few nips of whiskey from a flask he always carried in the car. My Mother always thought the flask was a pair of binoculars as that was what it looked like. I don't think she ever found out the truth about that flask!

I can remember as a child donning jandals and carrying li-los up the river as far as we could walk, then putting the jandals on our hands to use as paddles, we would float back downstream  to where we started. Great fun!

As a child I remember Dad having a friend who owned a jet boat. He used to tow it with an International truck, so when it went past our place I would recognise it immediately. Straight away, I would hop on my bike and ride up to the “Point” where the boats would launch. I would just sit on my bike and wait and occasionally he would yell to me to ask if I wanted a ride. I would be over like a shot. This was the beginning of my love for jet boating and for the last 30 odd years, have owned a boat of my own, which has been great for fishing and recreational use.

The Rangitata Gorge is perfect for boating as it has no big rocks to cause damage. It is popular for boating enthusiasts.
As we all know the river is forever changing, which is one of the things I love about fishing it,but the biggest change I notice is how much land has been lost over the years due to flooding. I think it has become far more braided  as it is spreading out over a wider area due to the shingle movement.
Groynes have been built which certainly help, but it is the areas between them being effected.

Fishing the river still gives me great pleasure, but now I get more pleasure watching someone else catch(and release, depending on the occasion) their first trout or salmon. It’s great to be able to pass on any knowledge I have for future generations. I now have a young grandson and I cant wait to get him on the river ; if he wants to of course!!

Apart from the salmon numbers declining rapidly each year (I wonder about those fishing trawlers), one of my biggest concerns on the river is the Black Shag population. They are there in big numbers(I can remember counting 18 on a dead willow tree at one time). They cause carnage to the trout and salmon (fry) numbers. I have witnessed a Shag swallowing a trout of about 1.5 lb whole. I cannot for the life of me understand why these mongrels are protected. They never used to be. I would be in total favour of them being unprotected.

These are just some of my stories and views on the Rangitata River over the years. 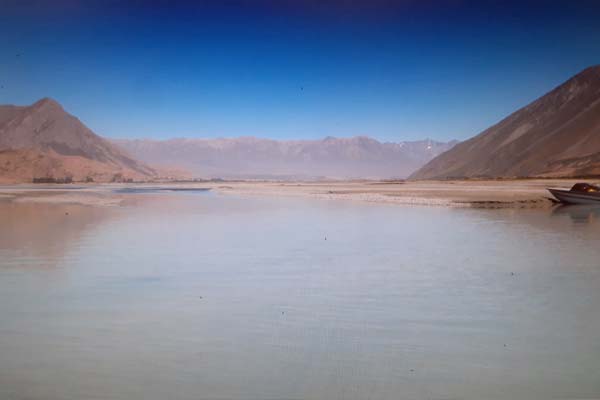 There is an interesting story with the photo of my fishing buddy (my Brother in law) standing on the bank playing a salmon late in the day.(Looking up the river).

He was fishing with trout gear when he hooked this good size salmon in slack water, but on the edge of the main stream, at 5.00pm. The fish took him right up to the top of the slack water which was perfect. I said if you can hold it there you’ll have a good chance of landing it. As it was on trout gear, he couldn't be too hard on it. But  the salmon slowly worked its way back down to where it was hooked and then got into the main stream. Then it was all on! I can remember running with him with the salmon going flat tack downstream. It ended up taking us about one kilometer from where it was hooked. My bro in law was feeling a bit exhausted so I gave him some swigs out of his water bottle.

The fish finally stopped at the spot where the photo was taken, but was not prepared to give up. Bro in law managed to get it over to right beneath him and had it sucking air on at least two occasions. Then it would work its way right back over to the other side again. By this stage at least a couple of hours had passed. Try as he might bro in law just couldn't budge it.

Then I came up with a cunning plan: why don’t I go back and get my boat, then try and get on the other side of it and try to “herd” it back towards you? we thought that might work so I go back,get the boat and come down to the fish which is still in the same position. To my amazement I could see why the fish wasn't going to move. He was very cunning and just saving energy by just lying on an angle to the current, and was letting the current do all the work. I was able to get the boat on the other side of the fish and my idea actually worked, and slowly managed it back to bro in law. He once again had it sucking air and this time he thought he might be able to land it, but no it went to deeper water again. I just stayed in the steam to try and stop it going back to the other side which worked. 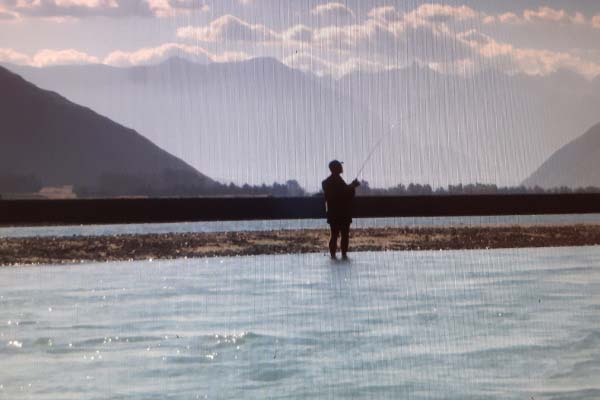 (when photo was taken). By this time at least another hour had passed. The fish decided it wasn't going to move so I eventually beached and waited with bro in law. It was now starting to get dark and I said to bro in law what do you want to do as we’ll have to go soon to get back to the trailer. He said “I've played this for so long now I’m not letting it go now, I’ll stay the night with it if I have to” (or words to that effect!) I said I can wait a wee bit longer then you’ll have to make a decision”.After another 15 mins or so I asked “ whats you decision?”He decided to really put the pressure on it and try to get it in. There was a horrible “crack” sound and his line gave up. You could have heard the language right up the river!! He was absolutely gutted! The time now was exactly 9.00pm, so he played the salmon for 4 hours! His line ended up in a complete birds nest after all the strain on it and it is still pinned to my caravan wall!
Talk about the one that got away!!

What are your interactions with the Rangitata river?

What time periods are you talking about?

What observations do you have?

Also the ever changing course of the river. I love that for the fishing aspect.

What thoughts and beliefs do you have about the river?

That it doesn't change and remains a braided river system

What does the river mean to you?

When I am on the river I feel like I am “home”. Being born and bred up there, the river was a big part of my life. I just love the beauty of the scenery and the tranquility with the bird life etc

What are the characteristics of the river that are important to you?

The braided river system with the variety of bird life(except the mongrel black shags!), and the fish species.

What do you want the river to look like in the future?

I wouldn't want a thing changed; just to remain the beautiful braided river that it is, and has always been.