In 2018 I wrote 'A battle of David and Goliath proportions is about to commence' over 10 cumecs of Rangitata Water with a band of stoic Salmon Anglers having appealed to the Environment Court the granting of this additional water. The group consists of spokesperson Paul Hodgson, the NZ Salmon Angles Association, South Canterbury Salmon Anglers Association and Future Rivers.

Today I can report that our goal to stop the 10 cumec take has been achieved, though in a round about sort of way. Our angler group agreed to settle and achieved significant concessions that would have benefited the river going forward, had we not appealed it's likely the project would be well advanced by now and the point at which the plug could have been pulled well past. Instead though, sighting changes signaled to water management by the Govt, and mainting relationships with Iwi, the RDR has pulled the pin. It is a great result for us anglers, for the river and NZ as a whole.

However our focus on the river has helped highlight other issues, notably the decline in the salmon fishery, but also the decline in the sea-run trout fishery, caused we believe by the disappearance of the once abundant Stockells smelt which drive the whole ecology of the lower river. A possible cause of this is the increases in silt smoothing smelt spawning areas in the lower river. Lidar mapping of the lower river to start monitoring the changing nature of the riverbed is imminent. Meanwhile an effort to understand the resource is underway between Ecan, Doc and F&G as they survey the river lagoon. Understanding this may pont to a solution for not only the native smelt but the brown trout fishery.

A critical element for the salmon fishery is of course that all water takes are effectively screened. The RDR is in the process of installing a state of the art fish screen that should fix this problem on their take at least. As a result of the appeal our groups have a seat at the table in developing an acceptable plan to monitor the new screens performance.

We continue to pursue a Statutory Plan for the river also, to further protect it, having made a presentation to Ecan last year. We are currently following up on this 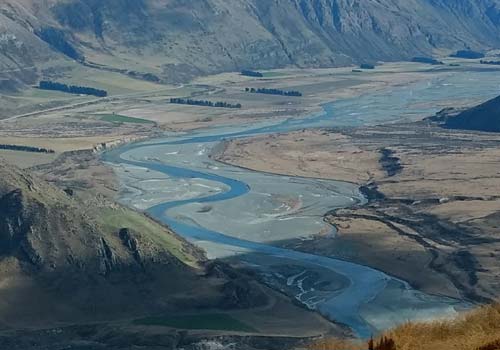