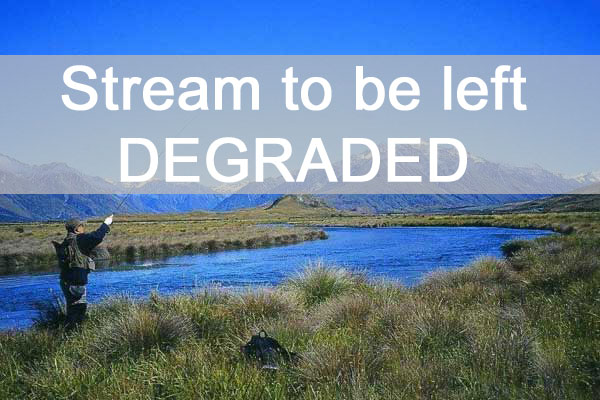 At their recent meeting Central South Island Fish and Game refused to budge on a plea to fix a damaging diversion on Deep Creek, a superb backcountry stream and important salmon spawning stream set in Lord of the Rings country at the foot of Mt Sunday in the Upper Rangitata River valley.

Citing increased erosion in the natural main stem if water is returned to it and the threat that poses to salmon spawning lower down as reasons for not acting. And CSI also stated 'that any threat to salmon habitat in Deep Creek threatens the sustainability of the Rangitata salmon fishery'

Yet when additional information was provided to the Council highlighting real losses to the both salmon spawning and juvenile rearing habitat, with a picture showing actual salmon spawning beds already becoming dewatered, the Council failed to change their opinion.

That information also clearly shows minimal erosion risks in the dewatered main channel, yet having cited erosion as a reason for doing nothing; they are choosing to completely ignore the substantial new erosion that’s occurring and likely to continue for many years in the narrow fast diverted flow, which is already depositing silt into that very same salmon spawning area below!

Deep Creek is also noted for its superb trout fishery, visited by anglers from around the world, the middle section of the original main channel will be lost forever unless this is addressed.

This all flies in complete contrast to recent habitat work only a few kms away on the south side of the river, which highlights that remedial environmental work can be achieved within these sensitive areas.

From the Fish and Game website: " Fish & Game manages maintains and enhances sports fish and game bird and their habitats in the best and long term interests of present and future generations of anglers and hunters"

This is clearly not happening in the CSI, after over two and a half years of getting nowhere and with this stream quite literally now on its knees, it is time that all licence holders and the general public are made fully aware of what appears to be complete negligence on the part of our fisheries managers.

Asked “If F&G wont or don’t want to be involved then I can organise the repair work, for that to happen I need to know that F&G will support such action and any consent that may need to be acquired.” at their August 21st meeting, the CSI F&G Council, with no further discussion on the issue, confirmed to Future Rivers trustee Steve Gerard that the answer to his question was no.

Both Salmon and Trout anglers are urged to contact the CSI office and their local council representatives and ask for immediate action. They should also demand answers as to exactly why this situation has been allowed to continue like this for such a very long period of time.

The handling of this and other recent issues by the Central South Island Fish and Game raises serious questions as to why they are not acting in the best interests of licence holders as required under the Conservation Act specifically 26Q (b) (v) by undertaking such works as may be necessary to maintain and enhance the habitat of sports fish and game, subject to the approval of the Minister, the land owner, or the administering authority, as the case may require:

Details and photos are available on the Future Rivers website www.futurerivers.co.nz